Bio
Scott Shawcroft is a software engineer. He grew up in Hansville, WA and attended North Kitsap High School in Poulsbo, WA. In June 2009 he graduated from the University of Washington with a Bachelors degree in Computer Engineering with Honors. During his time at UW he interned at Creative Commons and Google. After his graduation he worked at Google full-time as a software engineer on Google Maps until June 2015. In July 2015 he started developing a number of open source software and hardware projects which culminated in his company Chickadee Tech. Below are slide files for presentations he's given and links to many of the projects he has done.
Slides 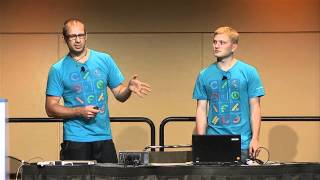 Menzies
March 18, 2009
Work
Chickadee Tech July 2015 - Present
Founded by Scott in 2015, Chickadee Tech aims to develop innovative open source hardware to support awesome open source software such as Arduino and Betaflight. The first large project is Polystack which is a modular microcontrol stack originally design as a flight controller for quadcopters (aka drones.) Scott developed all of the designs himself in Kicad while also doing all of the business related activities such as registration, package design and web design.

Google July 2009 - June 2015
Scott was a core engineer on the map rendering team. He has worked on the bicycle map, traffic overlay and custom styling API. Furthermore, he has helped improve the design of the map and the infrastructure behind it. His latest accomplishment was replacing the core styling system with a new system that supports smooth zooming and is much more maintainable.

Projects
Polystack October 2015 - Present
The primary product of Chickadee Tech is a multiple of open source hardware design that all stack in a modular system. Its modularity allows for easy combination of PCBs with different functions that all work together with the core microcontroller. The first two microcontrol boards feature STM32 chips with motion sensors. Another Arduino-compatible is in development.

rcbuild.info/rcpart.info June 2015 - April 2016
Scott's first project after Google, rcbuild.info, was a website where people could share their quadcopter builds and find similar builds. After finding similar builds they could analyze the differences and learn how to tune their quadcopter better. The website was done with React.js and used Elasticsearch to power the similar search functionality. A result of this work was a database of quadcopter parts gathered from a variety of sites. rcpart.info was a way to just find parts and their price and availability at a number of different vendors. Both projects were stopped in favor of Polystack.

Menzies Jan. 2009 - Mar. 2009
Menzies is a distributed datastore for OpenStreetMap data created for a capstone course at the University of Washington. As with many projects, it was done in collaboration with Jason Kivlighn.

MDN/Sidestream Aug. 2006 - Jun. 2008
The Media Distribution Network was an attempt to create a non-profit backed distribution system for media. The project aimed to bring a legitimated peer-to-peer system to promote the free availability of an Internet distribution system like iTunes. It went through a number of iterations during Scott's time at the University of Washington. At this time, it hasn't been restarted and its ideas have morphed into other projects.

liblicense Jun. 2007 - Aug. 2007
liblicense was one of two projects done during a summer internship at Creative Commons. It aimed to create an easy mechanism for developers to hook into file licensing. Its development continues under the guidance of Asheesh Laroia.

ccLiveContent Jun. 2007 - Aug. 2007
LiveContent is a Fedora liveCD created to promote open source software and Creative Commons licensed content. It included photos and songs. However, the size limitations restricted the amount of content available. The second iteration created after Scott's internship by others was a LiveDVD.

Keystroke Aug. 2006 - Dec. 2006
Keystroke is a program aimed at easing the video annotation process which includes subtitling. This was done by controling video playback by keystrokes related to the input of information. This contrasts the limited method of playing video in a program separate from the text input. It creates Annodex files to include the data.

Annoamp Dec. 2005 - May 2006
Annoamp is the first desktop application created to play back Annodex files. Annodex files include the ability to store chapter data, like DVDs, and subtitles. Annoamp allowed for the display of this data and the related seeking.

Denu Aug. 2004 - May 2005
Denu is Scott's first desktop application. Its name is short for Dynamic Menu. Denu aimed to ease the maintenance of application menus in a variety of window managers and desktop environments. It detected the applications automatically using numerous methods. Denu was created prior to the development of the freedesktop.org .desktop file spec now used in all distributions.

Dynamic Flash Forum Aug. 2002 - Nov. 2002
Dynamic Flash Forum (DF2) is one of Scott's first programming endeavors. It aimed to combine the beauty of Flash and animation with the backend power of PHP and MySQL to create a modern message board system. It is his first open source project.